Last night was a great night for William Wilson Clothing. It was a testament to what God can do and how he can change your life on a dime. But before I get into why it was so great for me, let’s talk about what was really important: the real purpose for the event.

First it was to benefit the American Heart Association. Every dollar made went to the AHA. Brother Fred from 96.1 and Britteny Cason, (from everything else on the Charlotte Scene – I swear she has more jobs that a temp agency) were the hosts and they did an exemplary job. Various local celebrities and designers donated their time to help make the night special. The event was indicative of what you would expect from JSW Media Group and Charlotte Style Magazine, top notch, classy, and professional. Of course, Charlotte Seen was on hand taking care of the red carpet, and Kevin Hughes captured all the glory in pictures for posterity. 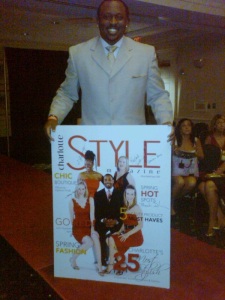 William Wilson with the cover of Charlotte Style Magazine. His client Mike Minter is on the cover in one of his suits.

Now, the reason it was a great night for William Wilson Clothing. First, my client Mike Minter was named as one of Charlotte’s 5 Most Stylish, and was featured on the cover with the other 4 finalist including T. Strong (aka @therealtstrong on Twitter). He was wearing a navy blue wool suit by yours truly. Then my client, friend, and fellow Arkansas Chris Harris of the Carolina Panthers participated in the Celebrity Go Red fashion show, and he tore it up as only “The Hitman” can. And lastly, I was named one of Charlotte’s 25 most Stylish people, myself. I’d say that is a pretty good night for a guy that just opened his door for business a little over a year ago, and isn’t open to the general public. This was a great night for me both corporately and personally, and I’d like to thank Charlotte Style Magazine and it’s staff for the honor.

But what I’m the most thankful for is that I have another testimony to the power of God, to tell when I speak to businesses about business practices, branding, and faith; or when I’m counseling my friends that are down and feel like they are never going to get ahead. I can even use this to lift myself up as well sometimes. It’s hard to believe how fast God works when you practice his principles. Don’t get me wrong, I’m not perfect and I have my vices like anyone else. But God knows my heart and always over delivers to me. I hope this never stops. I hope that people can look to the goodness that God has bestowed upon me, a country boy from Arkansas, and see that if he can do it for me, he can do it for them. So again I thank those that nominated me, Charlotte Style Magazine for choosing me, and most of all God for blessing me.